‘I had been using alcohol, crack, cannabis and most other drugs since I was 13, but every time I stopped it wasn’t long before I lapsed or relapsed. 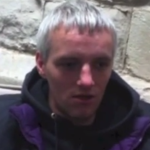 When I took the TRP I was homeless and unemployed, constantly angry which often erupted into violence, and I’d felt worthlessness for so long I got to feel I deserved whatever bad things happened to me.
I had some pretty simple goals for the TRP, I wanted to spend more time with my 6 year old daughter, stop using, get a job helping vulnerable children and find somewhere to live.

One the second day there was an admin mix up, so I couldn’t get into where the course was, normally I would have left, blamed everyone and started drinking; but instead I decided to use the time productively. I calmly reread my notes and practised the process. It f***ing works.

I realised I’m not a useless pile of sh**, in fact I’m a nice guy, I’m kind and thoughtful. And the negative stuff people have told me about who I am or what I am capable of in the past is their belief and not fact.

I stopped using on the evening of day 3 and haven’t drunk or taken drugs since. I moved into a hostel in the 4 days since the seminar; although it was warm and dry at night, it caused different problems; it was a ‘wethouse’ so the other residents were using and drinking; one of the other residents gave me a can of lager, which I felt I couldn’t refuse out of politeness; I took it back to my room, unopened and placed in on the bedside table. It was amazing to be able to sleep, and wake up, with the can so near and to not feel the need to drink it.

6 months after TRP and I’m still clean and sober, I’m working now and moving to a new flat this weekend. I’ve more frequent and regular contact with my daughter. And have joined a college to do a number of different courses and I’ve even been asked to visit other homeless sites to inspire others. If TRP works on me, anyone will benefit from it – I used to have no time for life, now I haven’t enough time for living. I’m so excited about my future, I feel like a kid in a sweetshop’

For the best possible visit experience, we’d like to use cookies on your system – is that OK?OkNoRead more